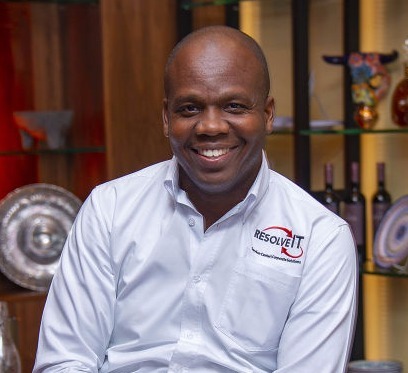 Throughout the month of April, particular attention has been given to the role of technology in entrepreneurship and the movers and shakers locally that have also embarked on their own entrepreneurial journey. Our final feature for this month is Almando Cox, Managing Director of Resolve IT who is no stranger to the Jamaica Business Development Corporation (JBDC), as he has both benefited from the services as well as given his own services to the organisation. Here is the story of a driven and curious entrepreneur.

Mr. Cox is a graduate of the University of Liverpool with a Master’s Degree in Information Systems Management. His background in the field of IT is quite expansive as he has filled both functional and senior roles and has almost two decades worth of experience. The astute professional traces his interest in IT and business back to his early years where he was known as the ‘repair guy’ at his primary school. He said, “I used to own sharpeners and was interested in how they worked. I soon after began to have an inventory of sharpener parts and started repairing my classmates’ sharpeners when they were broken.” He graduated to repairing ‘Paper Mate pens’ and then in high school made his transition to selling greeting cards. Subsequently, he made his big jump into repairing appliances for his community. This jump was the official start of his entrepreneurial journey, and he moved business from his verandah into a commercial space as he was expanding. He then made a transition into computer repairs and networking because of the demand of his clients. He began doing his research to meet these demands and went on to do courses to build out his knowledge base. This is how he fully transitioned to what is now ResolveIT.

What is Resolve IT?

Almando describes Resolve IT as “a full-service IT company that focuses on the core services that most organisation’s would need to survive and be successful. That includes productivity, communication, collaboration, automation and security tools.” ResolveIT has been known for accelerating business performance with their technological products and services since 2004. Some of ResolveIT corporate clients include the National Council on Drug Abuse, DRT Communications and Toucan.

Though Almando had been in business for almost 16 years before coming to JBDC as a man set on evolution and improvement, he saw the need to seek assistance. He said “I realised we needed more input on corporate governance if we were to scale and expand in the way I had been envisioning. A friend of mine told me about the JBDC and I knew it would be a great fit.” Almando formed part of cohort 3 for the JBDC Accelerator Programme which is a 6-month intensive programme for business growth. Within his cohort, he was awarded for being the participant with the most entrepreneurial mindset and we can see that from an early age this was in his veins. Almando was also awarded the coveted JBDC B.O.S.S Man of the Year 2020.

Like many other companies, Almando said the Covid-19 pandemic caught them a bit off guard and they had to make adjustments to the way they did business. “We had to close our service centres for about 4 months but stuck to serving our corporate clients,” he said. Adding that they capitalised on their time, he said “we used the time to restructure and do paperwork for the business.” As time went on and they made their transitions online smoothly, businesses and schools started requiring their assistance to help with work from home as well as online school. This provided a great way for them to learn the art of pivoting.

Almando encourages entrepreneurs from his years of business ownership and says, “As entrepreneurs we need to network and align ourselves with groups and individuals that can help us develop and move forward. He also added that “in this entrepreneurial journey I have made a lot of missteps but I have learnt from each of them and those lessons help to guide my decisions today.” Almando noted that one of his biggest lessons as an entrepreneur is the importance of family “Regardless of how many things you are pursuing, to be successful it is important to have a healthy family or support system,” he said.

Almando says the way forward for ResloveIT includes scaling their operations and continuing to look for talents that complement the team and continue expanding to the region and beyond. He said that success for ResolveIT looks like continued impact through the nonprofits they are aligned with, helping to make small businesses viable with their technological solutions and impacting the education system. “We want to get to a stage where we can say this particular thing in the society that is helping the majority is a result of the input of ResloveIT,” he said.

YOU TOOK THE LEAP, NOW WHAT?